In every dimension – OMV going digital 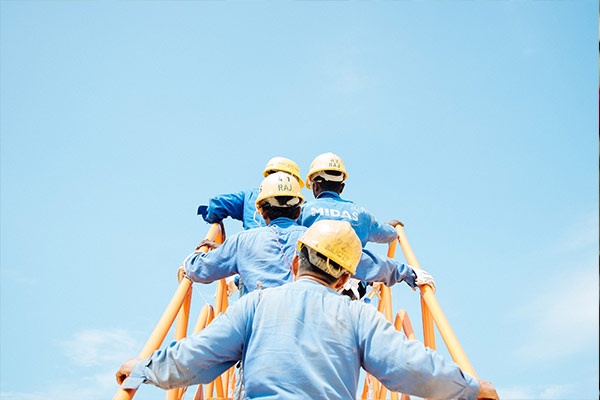 With its own digital journey, OMV has formulated an ambitious strategy for its digital and respective business transformation. The goal is ‘to bridge the gap with a bundle of measures for digital market leadership and to develop smart technologies along the entire value chain’. The Austrian company, headquartered in Vienna, produces and markets oil and gas, innovative energy solutions, and high-quality petrochemical products. With consolidated sales of 23.5 billion euros and a workforce of around 20 000 in 2019, OMV is one of the largest publicly listed industrial companies in Austria. Around 43 percent of the shares are in free float; 31.5 percent held by the Austrian government, and 25 percent owned by the United Arab Emirates (1). In the upstream sector, the average daily production in 2019 was 487 BOE/D. In the downstream sector, the company operates three refineries in Europe and holds a 15 percent stake in ADNOC Refining and Trading with an annual capacity of 24.9 t. The firm also holds a 75 percent stake in Borealis, one of the world’s leading producers of polyolefins. In addition, it operates about 2 100 gasoline stations in ten European countries and has gas storage facilities in Austria and Germany. The digital strategy was formulated in the spirit of an integrated group structure together with the divisions and was coordinated with the digitalization programs initiated there – including DigitUP for the upstream area, the goal of which is optimized asset performance management.

Digitalization is a matter for everyone – Albert Meyer, Group Expert Technical Documentation / Tools & Systems / Refining Asset Management, emphasizes this in an interview with our editors. Thus, it is important that the staff cooperates. And while we’re at it, we’re already asking questions: Which instrument can help to transform digital visions into real benefits in everyday business life? “The feedback on the introduction of UniversalPlantViewer was phenomenal! It was really accepted by all employees – even the building fitters use the system without any reservations,” Mr Meyer tells us with enthusiasm. What has met with broad approval at OMV is UniversalPlantViewer (UPV) from CAXperts GmbH based in Ismaning near Munich/Germany. The introduction of the visualization platform took place in the course of the three turnaround projects (HDS1 and HDS/KEP – hydro-desulfurization / catalytic dewaxing and TGU – thermal gasoil unit) at the Schwechat site near Vienna/Austria. The refinery facilities there were shut down, disassembled, cleaned, tested, repaired, and reassembled in the shortest possible time.

Two large monitors with 70-inch screen diagonals were installed in a construction container on the plant site as a central information point. One monitor shows a kind of electronic wallpaper called ‘eTOP’ (electronic turnaround optimization platform) on which the messages for each piece of equipment are listed in digital work control sheets. eTOP acts as digital work control sheets. These data are simultaneously visible on the second monitor on which UPV is running. There they are visualized as a component with metadata located in the 3D asset model. The entire status reporting system is controlled via SAP, but currently not yet via a direct interface but in a semi-automated way. The highlight here is that the progress within the maintenance work’s lifecycle is immediately visible to everyone involved via UPV by means of different coloring.

Before the shutdown of the two plants, the components per measure were combined in a sensible way based on considerations with regard to the order they could be taken out of operation. This was documented in the TAR (turn around) plan created in SAP. The objects to be processed per measure are displayed in UPV in the same color. If part of the plant is then actually taken out of operation during the turnaround, this is coded in UPV with a different color. Accordingly, different color codes are used. Thus, the processing cycle of the individual parts can be seen in UPV during the TAR. Mr Meyer explains: “We used UPV for a sort of multidimensional project management. The entire TAR staff benefited from this visualization, because everyone reports to a common, always up-to-date database.” In total, almost 650 employees logged their work in this way over a period of seven weeks. Greater time savings in the double-digit percentage range resulted from the improved clarity compared to the conventional approach with paper plans or MS Excel lists. In the case of a change, the affected native plant data (in PDS or S3D format) are loaded into a conversion directory on a separate UPV server. In an overnight batch run they are then transferred to the target UPV format. Philipp Kahl, a Bachelor’s degree candidate, has documented the complete procedure in the scope of his thesis (2). In a lively exchange of ideas with Mr Meyer together with many other, the research assistant developed, prepared, and documented corresponding ideas during his studies in process engineering and compared the data with the SAP backbone on site on a daily basis – in other words: Mr Kahl was at the very forefront of this digitalization initiative. Now it’s the turn of Mr Meyer’s team to realize the SAP interface. The go-live for the interface is planned for next year.

“The feedback on the introduction of UniversalPlantViewer was phenomenal! It was really accepted by all employees.”
– Albert Meyer, Group Expert, OMV

Almost every CAD system comes with its own viewer. So, why introduce another one? This is a legitimate question, especially since OMV is currently harmonizing its engineering departments with a new CAD system. How-ever, the Group Expert describes the corresponding tools as absolute specialist systems which, although they do a good job in engineering, do not sustainably advance the envisaged broad-based going-digital strategy. Instead, even in plant design, UPV is increasingly used because it provides such a fantastic user experience. “With UPV, we now have a visualization platform in-house that we can make available to our entire staff because they can work productively with it within a very short time.” Are these certainly outstanding features sufficient to support the Group’s transformation strategy as whole? In short: Yes, because: “We are currently going through a steep learning curve. We are trying to visualize our assets in 3D in the greatest detail. Up to now this has only been done in 2D. The goal is to create the digital twin. In the future, the plant inspection department will also plan its work in 3D. UniversalPlantViewer will bring this to real life”. These are ambitious plans that call for a reliable, competent vendor. Is CAXperts the right one? “The relationship at the moment with CAXperts is extremely good. I can communicate equally well with the management and their technical department. We get all the support we need,” Mr Meyer says. This is an important experience, he says, because there are currently many steps to be as we progress along the digitalization roadmap as afore mentioned in the turnaround projects. The critical discourse with a competent partner can move mountains (of resistance) and technical obstacles out of the way in a short time frame. “Ideas on our part have a direct influence on product development at CAXperts. This would be unthinkable with any other system provider. Our partner is also prepared to implement special solutions,” Mr Meyer emphasizes with satisfaction. Laser scans are made to build up all the facilities as digital twins; a GIS system has also been introduced and its information is linked to 3D models. It is possible to jump from the 2D representation, for example from the layout or GIS to UPV – and there examine the object in 3D – and then back to the original system. Conclusion: UniversalPlantViewer is the new Normal A 70-inch monitor is installed in the hallway to Mr Meyer’s office, on which system components are visualized via UPV. “UniversalPlantViewer is already used as a daily work tool. This is our new standard”. And everyone who gets shown UPV’s features wants to know when they can start using it themselves. So, everyone is looking at Schwechat site. (bv)

OMV’s digital strategy was formulated together with the different business units in the spirit of an integrated group structure and coordinated with the digitalization programs initiated there – including ‘DigitUP’ for the upstream area, the aim of which is optimized asset performance management (APM). An APM approach also benefits sustainably from the introduction of UniversalPlantViewer and the 3D visualization of assets. ‘DigitUP / Digital Subsurface’ is designed to represent the company’s proprietary assets in the form of as-built 3D models (‘digital twins’) in order to streamline the management of exploration and development projects. One goal is to reduce field development time more than half by 2025 because it is believed that scenarios can be created and analyzed upfront more quickly. The OPEX per field development plan to be reduced by up to an amount in the low double digit million euros range. ‘DigitUP / Real-time Digital Oilfield’ plans to operate assets autonomously around the clock – supported by flexible, digitally employees. This also includes use cases for the virtual commissioning of production facilities. By the way, for OMV, digital market leadership also means setting an example in terms of a sustainable HSSE policy by reducing the CO2 footprint and meeting the highest security standards. 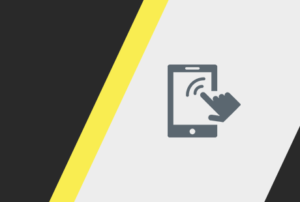 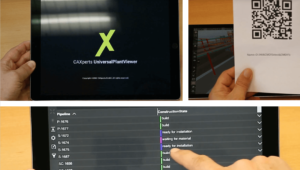 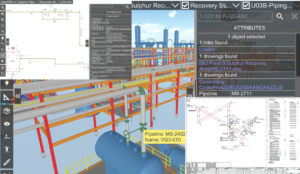